"Sufism is not a fashion statement but a serious quest for union with God." 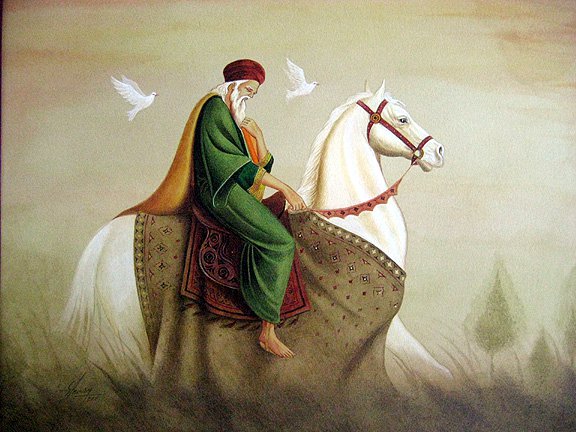 This is a breathtaking water color painting made by S. a. Noori. An article about a recent exhibition in Islamabad covers the spirituality that lives in them:

Noory’s work is nuanced with Sufism- white bearded men in trance, holding the Quran. Perhaps the most intriguing piece is a painting of a tall, bearded man with his hand outstretched upwards holding onto a rope as he looks serenely towards the sand. The rope goes straight into the sky and out of the painting where the viewer is left wondering where the other end of the rope must be.You can read the complete article here. 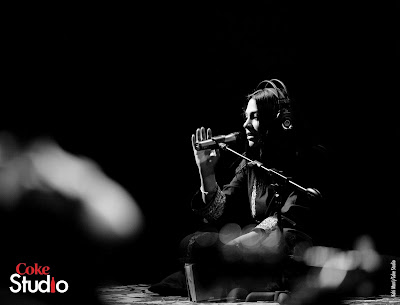 From GulfNews comes this article about Sanam Marvi, considered one of the youngest singer-story tellers:

The rising voice of Sufi music
It's about love … the love of humanity.
It's about a world with no boundaries, no violence and no hunger.
It's about a path that says the only true thing to live by is ‘Haq' or ‘right'.
Its instrument is music. Its storytellers are poets and singers.
Its battle, or ‘jihad', is against the ever-manifest human ego.
Sufism is — compassion. And Sanam Marvi perhaps its youngest storyteller.

What is Real Love?

This is a series of two videos by Shaykh Hisham Kabbani. I invite you to watch and listen to them too.

The mysterious man never came again, and finally, the youngsters avoided that they had just invented the story of him beating his daughter. For they had never seen that man before. The following weeks I would stare at the same point but the man wasn't there. The youngsters would look at me with a question mark on their faces. "No, I haven't seen him". And after all, God always sends mysteries that can never be solved until we are wise enough to perceive the source of such mysteries. These youngsters now, when they see me, they greet me and look more serious than before. Somehow they have grown up a little more and they approach to give me some words of respect. About the woman, she screams my name until I turn and see her, and invites me to go to her house and try her dinner with her family. We have become good neighbors all of us, and still the minaret smiles to the crowd and to us, while the birds sing strange songs they only understand.

The Takfeer Of Ibn Arabi

Ibn 'Arabi and His Interpreters

Ibn 'Arabi's own Summary of the Fusus

To download these e books, just check the section Pearls of Wisdom on right pane.

Finding the Mystic Life in All of Us

Mysticism seems to move beyond the barriers of duality created by traditional religious doctrines, and expresses the "one Reality" that the saint-like Hindu, Mātā Amritānandamayī Devi, known as Ammachi, addressed during her 2000 visit to the United Nations. Mysticism is the search for an accord with, or awareness of, a spiritual truth or God through direct experience or insight. This idea is investigated by one of Ammachi's followers, Ethan Walker III, who, in the Mystic Christ, claims to have found God in his own life. He declares:

By exploring other faiths we begin to see what is common to all paths: love, tolerance, innocence, compassion, devotion to God, forgiveness and service to others. As these essential aspects are clarified and reinforced by their appearance again and again in the major faiths of the world, we begin to find acceptance and tolerance toward other faiths.

To read the full article, visit this article that appeared on the Huffington Post.

Stanford's Özgen Felek investigates the power of dreams in Sufism

Through a study of dreams, Özgen Felek charts the ascendance of the 16th-century Ottoman ruler Sultan Murad III from humble disciple to spiritual and political leader.

BY KELSEY GEISER
The Humanities at Stanford

Every night when the 16th-century Ottoman ruler Sultan Murad III went to bed, he looked forward not just to rest, but also to the guidance he would find in his dreams. In the morning, Murad, the grandson of Suleiman the Magnificent, reported his dreams to his Sufi – a mystical Islamic master who interpreted and transcribed the signs and symbols to help the sultan make decisions about his empire and his personal progress.

Hundreds of dream narrations like this were eventually compiled into a bound manuscript that established the ruler not only as a religious leader but also as an important authority figure.

This article talks about how scholars and educationists in India are urging the government to hold an international conference on Sufism to promote the message of peace and love as well as an invitation to people from all over the world to attend the conference in which it would be asked the creation of a Sufi University for research.

I really wish I was able to write more, in fact.. Write! I haven't done it since... a year, perhaps? Yet I have things to share, as I have been traveling inside and outside. But I really don't know where to start with, as things don't seem as easy. Struggle, I am thankful for it, Love, Thank you for it, new horizons, excitement and wonder, but really looking forward to the beginning of this quest. 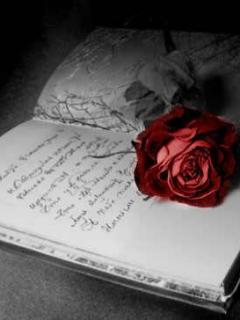 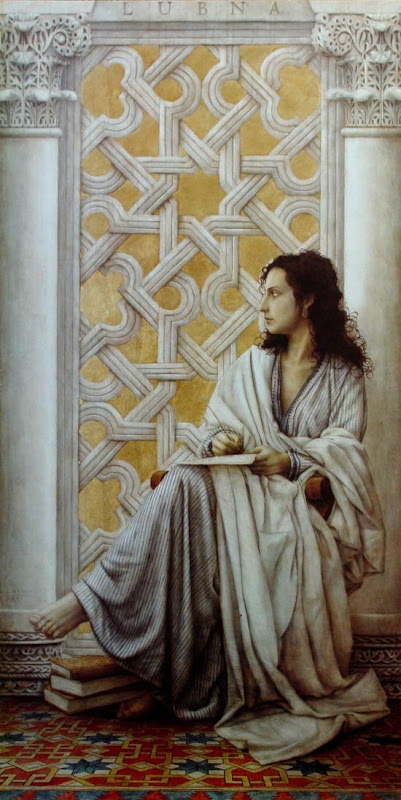 The Library of al-Hakam (al-Andalus) was the most important one, during caliph al-Hakam II (961-976), founded by the Omeya Dinasty. He also created the sina’at al-nas where copists would work in excellent calligraphy, like Abu Fadl b. Harun, of Sicilian origin, and Sa’aid b. Muqqadas as well as the Lubna women (al-Hakkam secretary) and Fatima The Breath of the Merciful

The Breath of the Merciful is understood as the cosmic dynamic that vitalizes the many in the One. It is the ever-present ‘Breathing’ that makes it possible for this infinite universe of duality to come into being while never being other than the nondual essence of the One. Seeing the nature of this dynamic gives us a chance to intuitively understand how there can simultaneously be the one indivisible essence of the Realand the endless proliferation of phenomena. This understanding, if it occurs, is not conceptual and is not simply a metaphysical nicety. ‘Getting’ the relation between the relative and the absolute is at the heart of all experiences of spiritual awakening.

The Shadow of your Soul 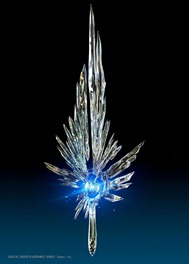 Where is the shadow of your soul?
It rests silent among the chaos;
it looks for a sparkle of light to be gone;
suddenly, a myriad of joy reflects upon your soul, dismissing the echoes of terrible nights, wondering, wandering, for the perfect flower, the perfect bird, the perfect love.
The shadow awaits, in silence, until you give to your soul the delicious tears, the miracle of tasting the bitterness with joy.
Then, it goes away, waiting to return, to be sheltered in your heart’s lap, until you understand that it is what makes you desire the Light of Lights. Until you understand it is a companion you are aware of, forever in your path.
Do not ignore it, just embrace it. Like the child who has no mother, transform the sadness into laughter, into Love. Do not ignore what is giving you the Desire to attain  True Love. After all, it is also a guide, a silent guide that brings you to the contrary way, the way you follow when you Love. Be always thankful to the wrong things that happen in your life, because they are the key to your inner strength. The shadow of your soul follows you, no matter what.

Three pearls fell down the river, from my broken necklace. I let them go, let them see what I couldn’t, let them encounter adventures I would never dream of.

But don’t look at us, the pearls said while I glanced from the distance, and my feet started to wallk back home over the dusty ground.

Look at the pearls of the Unseen, you are lucky, we are almost there, and we are tears now. Not pearls. You are lucky, they said, for the waiting, the searching, the seeking, is the whole adventure, the great reward, where rivers of pearls become tears of joy. We are now tears going to encounter the ocean of Love. But you are still not there, so feel and cry, and suffer and smile and struggle, because this is where all the signs of Love can lead you to be what we are now. And I sighed and desired to be them.

Thoughts from a young girl.

A Quote by Ibn Arabi

All those among the Sufis who had no visible murshid (guide), that is, an earthly man like themselves and a contemporary, called themselves Uwaysis. One of the most famous was abu'l-Hasan Kharraqani (d. 425/1034), an Iranian Sufi, who left us the following saying: I am amazed at those disciples who declare that they require this or that master. You are perfectly well aware that I have never been taught by any man. God was my guide, though I have the greatest respect for all the masters.

Say I Am With You 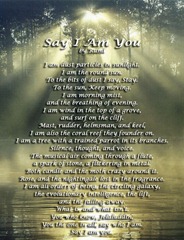 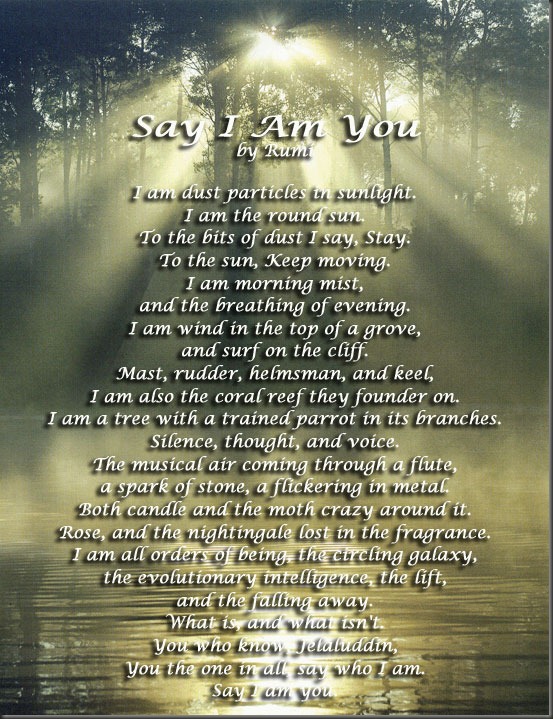 A History of Islamic Philosophy

Osho : The Sufi is not an escapist

Please read this article about the sufi character, it is very beautiful, and important. Via The Mystical Path

For hundreds of millions of Sufi followers worldwide, music is at the heart of their tradition and a way of getting closer to God. From the Whirling Dervishes of Turkey to the qawwali music of Pakistan, Sufism has produced some of the worldï¿½s most spectacular music celebrated by Muslims and non-Muslims alike. Dalrympleï¿½s film traces the shared roots of Christianity and Islam in the Middle East and discovers Sufism to be a peaceful, tolerant and pluralistic…

International conference on Sufism and peace begins in Pakistan

Delegates from 70 countries are attending the conference which is aimed at promoting the philosophy of Sufism as it can help fight the menace of extremism.
Source: Xinhua
READ MORE

Azam Ali - I Am a Stranger in This World! 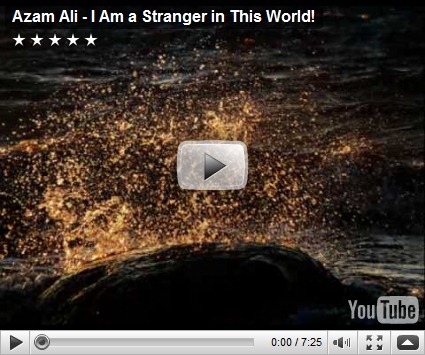 Listen these two beautiful musical instruments: the ney and the guitar...